Wang-Tang (ワンタン Wantan, also written as Wangtang and Wang Tang) is one of the playable characters from the Power Stone series.

Wang-Tang is a master martial artist from the town of Tong-An. He follows his master's instructions for his final test: collect the legendary stones that shine like no other jewels in the world. Roaming the world in search of the Power Stones, and testing his skills along the way, Wang-Tang's optimistic personality belies his deadly martial art skills.

In his ending, "Off to Train Again!", Wang-Tang finds golden dentures in Avalon Is. and wonders if that's the treasure his master asked for, taking it for him. His master says that's not it and tells him to keep searching. In reality, his master wants him to train by having him pass by many trials during his journey, making him stronger. That is his ultimate reward and the true treasure he seeks.

In Power Stone 2, Wang-Tang was having rough training in the top of the Chomoran Mountain when a huge shadow appears in the sky. To his surprise, there is a gigantic floating castle in the sky. Wondering if that's the final trial his master was talking about, Wang-Tang entered the castle and feels a sharp tension. "Ok! I'm gonna finish my training!"

Wang-Tang has long black hair which is tied in a braid and wears a short sleeve white Chinese training button shirt with green line designs coming from the buttons on his shirt and sleeves. He wears a yellow obi which is tied in the right side of his waist, yellow ochre Chinese pants and shoes with white socks. He also wears a pair of blue bracelets, with white hand wraps under both wrists .

In his anime appearance, he remains largely the same as in the games but with minor changes; his Chinese pants and shoes appear light brown and his socks are replaced with matching footwraps on his shins and his blue bracelets are now white.

In his Power Change form, his hair is golden blonde, he is shirtless while wearing a half brown armor with brown pauldron on the left shoulder and a green long greaves with white lines and an orange belt, yellow pants and green, white and orange boots. He wears a pair of brown gauntlets instead of bracelets. The outfit he wears has a dragon motif in his greaves and his boots.

Wang-Tang is an agile fighter that can unleash combo moves at lightning speeds. He also excels at wall climbing. 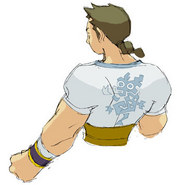 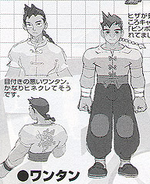