Valgas is the last opponent in Power Stone, being fought in Avalon Is.. This former soldier's appearance is so majestically imposing that any opponent is intimidated by his posture. His power is so great that he can defeat opponents only with the wind pressure from one punch or kick. One day he heard from one of his subordinates about legendary stones able to make any wish come true and departs to search for the Power Stones. When defeated, the Power Stones transform him into Final Valgas.

Valgas can be unlocked in the Dreamcast and PSP versions of the game after completing the game with Kraken. In his ending, "Darkness..." (ダークネス...), Valgas finally completes the Power Stone and obtains the power he wanted, but it is too much for him and he transforms into a giant monster, starting an era of darkness.

Valgas doesn't appear in the original Power Stone 2, but he can be unlocked in Power Stone Collection by completing the 1-on-3 mode with Kraken.

Valgas has blonde hair, red brows, and red eyes. He only wears blue pants with a yellow lightning design in both sides of his pants, black wrestling boots and white gloves with a pair of black bracelets on both of his wrist. He also wears a gun holster to his waist and wears a necklace with a red gem in the center.

In his anime appearance, Valgas appears as a human who is tall and very muscular in appearance as his eyes and brow are brown and has a small black gem on his forehead. The red pearl on his necklace enables him to see Falcon and his group's whereabouts while in Dark Land, and the dark Power Stone is kept inside of the red pearl. The gun holster that he wears is not seen, and sometimes he wears either a red vest with the "V" design at the back or a reddish brown robe and he is not seen without the black bracelets. When Falcon discovers his motives as well as he brutally defeats one of his wrestling teammates and his confrontation with him in Dark Land, Valgas's true face and appearance remains largely the same like in the games only his eyes and brow were changed; his skin becomes darker as his eyes and brows were black instead of red while his brow became thicker. He also gains the black bracelets on his white gloves. In the anime's finale, Valgas' eyes and brow are red like his game appearance.

As a child when he was bullied by kids in his age, his desire to acquire the Dark Stone and meeting with Falcon after being defeated in his monstrous form as Light Whirlwind, Valgas appears like his present self and wears an orange long sleeve shirt, gray pants, and brown shoes.

In Power Change mode, he has a demon-like appearance with horns on his head, his skin becomes black, and he has spikes on both of his shoulders. He now gained two pairs of spiked bracelets on both of his white gloves, his wrestling boots have a spike motif on them, and has a red gem on the center of his chest. In the anime, while Valgas uses the Dark Stone, his Power Change form has minor changes as his skin changes to gray in addition he gains spikes at the center on his back and the spiked bracelets on his white gloves is now a pair instead of two and the red gem on his chest is now black.

As the final boss, Valgas boasts a high performance. His physical strength is higher than Gunrock, having great defense, average mobility, and quick movements despite his big size. He has no blind spots. Most of his attacks are powerful enough to make the opponent drop two Power Stones such as using a Moonsault on his opponent, and he usually attempts to obtain them as soon as possible to increase his power. In the anime, Valgas finally demonstrates his wrestling fighting style by brutally defeats one of his teammates in a wrestling match.

When transformed, Valgas has a demonic appearance, and his Power Stone shard appears in his chest.

Valgas is a powerful and majestic person that is considered the world's strongest man, being a fighting superstar. Edward Falcon idolizes him and dreams to one day become like his hero. Although Valgas appears to be a gentle person, his true character is a villainous person who only cares for power. Near the end of the anime, Valgas attempts to obtain the Power Stones to wish for the world to become a dangerous place to live, so only the strongest may survive. 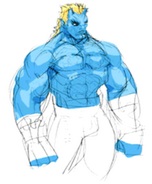