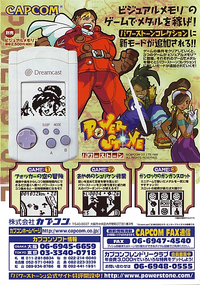 The VMU, or Visual Memory Unit, also referred to as the Visual Memory (ビジュアルメモリ) in Japan and Europe, is the primary "memory card" produced by Sega for the Dreamcast home video game console. The device features a monochrome liquid crystal display (LCD), multi-player gaming capability (via connectors at the top), second screen functionality, a real-time clock, file manager, built-in flash memory, and sound capability. The arcade and Dreamcast Power Stone games are compatible with the VMU.

The first game contains three minigames for the VMU that are unlocked by completing the game with 5-7 characters. Obtaining 1000 medals in the minigames will unlock the music gallery, and 2000 medals the art gallery.

The minigames are also included in Power Stone Collection, but are separated from the main game and obtaining medals only unlock other minigames. Aerial Adventure is available from the beginning, with Shuriken Training being unlocked with 500 medals and Gun-Gun Slots with 1000 medals.

In Falcon's Aerial Adventure (フォッカーの空の冒険) Falcon must fly with the Hockenheim as far as possible within the time limit while avoiding obsstacles. Getting three Power Stones will temporarily change the plane into a rocket, gaining a speed boost and invincibility. Passing by checkpoints will give Falcon extra time. The player receives 1 medal for every 100 km.

In Ayame's Shuriken Training (あやめのシュリケン修業), Ayame must aim and throw shurikens at ninjas. She starts with 30 shurikens and one Hana-Shuriken, which hits everything in the screen. 20 ninjas of +1 score will appear, with +5 ninjas and Power Stones appearing occasionally. Hitting three Power Stones will give her an extra Hana-Shuriken. If the player's performance is good, a big enemy worth many points will appear in the end. The medals received are equal to the player's score, and this minigame is the most recommended to collect them.

Gunrock's Gun-Gun Slots (ガンロックのガンガンスロット) is a slot machine with Gunrock that players can use to try their luck and obtain medals.

Power Stone 2 has a VMU application that can be used to trade items with other players and see all items obtained. Players can also use it to select up to five handy items and four decoration items to appear inside a VM Box during battles in the Dreamcast and arcade versions.