Ryoma (竜馬 Ryōma) is a playable character from the Power Stone series.

Originally a samurai from a small island nation, Ryoma got tired of living on the island and wanted to see the wide world with his own eyes. Determined, the ronin set out on a rowboat journey and tours the world. He can cut anything down in half with his blade and wants to test himself by seeing how far he can go with only one sword.

(In English sources his story is slightly different, being similar to his anime story)

In his ending, "The Vast World", Ryoma breaks the Power Stone, saying that he doesn't need it. The universe is vast and infinite, and the thought of what lies ahead is invigorating and embarks on a new adventure.

In Power Stone 2, Ryoma finally managed to obtain a legendary sword, "Tosa Arashi" (土佐嵐). He enjoys the moonlight reflecting on its edge, which cuts through iron like tofu. Suddenly, a strange light bounces off the sword's edge and shines on the huge shadow of a floating castle that appeared between the clouds. Ryoma's body flies up in the air. "Is this sword... guiding me to evil? Anyway, this is a good chance to give it a try." Ryoma goes up to the castle guided by the light of the sword. "Whatever enemy is waiting, I'll slice it up with this!"

Ryoma has long blackish-green/greenish-black hair which is tied in a ponytail and black eyes. He wears a yellow spotted vest under a blue traditional Japanese garb with white spirals on both upper sleeves of his garb, blue hakama with two cyan designs and it has a rip on the edge of both sides and geta sandals. He also has a yellow belt tied on his hakama and has a black sword holster for his katana on the left side of his waist and a red sword holster for his long katana on the right side and has a green sack with light green designs tied on front to resemble a scarf at the left side of his vest. He also dons yellow gauntlets beneath his sleeves.

In his anime appearance, he remains largely the same but with minor changes; his Japanese garb and hakama are indigo blue and the hem of his hakama is no longer ripped and was tucked into a dark yellow wraps on both of his ankles, his vest is no longer spotted as well as his sack is no longer has a design, his geta sandals are replaced with dark yellow sandals and a matching indigo blue tabi and his yellow gauntlets are darker to match his belt and sandals. In some episodes, he wears a white fundoshi with or without the rear apron beneath his main outfit.

In his Power Change Mode, he dons a silver metal samurai-esque suit with a large circle in the center of his chest, resembling the color scheme of Japan's flag. He wears a matching silver Genji helmet.

His katana gives his attacks a long reach, but large swings and movements leave him open and vulnerable. With a sword in hand, he can have a tough time picking up and throwing objects. In the anime, he is seen to be able to fight by dual wielding with his two katanas.

Ryoma is a samurai from Moon Land that soon ran out of worthy opponents who could compete with his skill and test his might. His master gives him a Power Stone and tells him to travel the world to improve his skills, especially to challenge someone with a Power Stone. When he discovers that Edward Falcon has one, he challenges him for a duel. Although Ryoma has a Power Stone, he doesn't like to transform, preferring to fight with his own abilities due to his pride as a swordsman. He has a crush on Rouge. 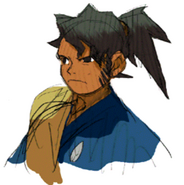 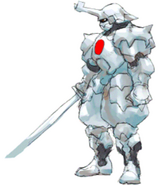