Rouge (ルージュ Rūju) is a playable character from the Power Stone series.

Rouge, the wandering fortuneteller, is both mysterious and graceful. Guided by signs from her crystal ball, her predictions being always accurate, she is dancing her way around the world in a search for the famed Power Stones. Even in the battle arena her graceful moves look more like dancing than fighting. She can wield fire as easily and naturally as her own arms and legs, putting the heat on any opponent who stands in her way.

In her ending, "Do Dreams Come True?" (ムフフッ！？, "Mufufu!?"), Rouge wants to use the Power Stone to bring happiness to every person in the world. Three years later, she has a tent in a World Fair in Paris, Maison de Rouge, and tells a client that her stone can make anything he wishes for come true. This ends up being quite embarrassing for her when he wishes to see her naked.

In Power Stone 2, Rouge has an ominous feeling when her crystal ball cracks while looking at the mysterious shadow that appeared from the sky. More than anything, she can't stand having her occupational tools broken. Just in case, she meditates and asks the Power Stone to send her to the source of the shadow. When she opens her eyes, she is inside the flying castle that people have been talking about, and senses an evil force in its depths.

Rouge is a dark-skinned woman with brown eyes and long brown braided hair that generally covers her left eye. She wears a white headband with the red gem on the center, a blue sleeveless crop top with a brown and gold collar, long white gloves with gold trim, purple harem pants with pink trim and brown shoes. She also wearas golden earrings and blue armbands to match her top. In the second game, the hoop at the end of her braid resembles a heart.

In her anime appearance, she appears almost the same as in the games, with her top is now white without matching armbands and her collar is purple to match her pants.

When she is about to go with Falcon at the opera, Rouge has her hair down and wears a pale blue strapless formal gown with white long formal gloves. She has a matching pale blue headband, a maroon belt adorned with a ribbon at the back, and black high heels.

In her Power Change form, Rouge is barefoot and has fire hair that flows upwards. She has gold wraps and tassels on her chest and wears a large gold bolero-like object around her neck. She has pink see-through harem pants with a pink belt hanging from them and gold ankle bracelets.

Though her normal attack and defense abilities are relatively low, Rouge can wield her fire attacks from a long distance and inflict severe damage. Her running and jumping speeds are also higher than the other fighters.

During Power Change, she has a genie-like appearance with fiery hair. A fireball with an eye follows her. In the anime, she can summon a magic carpet that can fly after she rescues an injured Ryoma from a burning palace, absorbing the flames in the burning shipwreck and can melt through ice.

Rouge is a fortune-teller from Fire Land who is well known for her accurate predictions. While in Londo, she meets Edward Falcon and Ryoma, with the two developing crushes on her. She later discovers that her crystal ball had a Power Stone inside, which allowed her to see into the future.

Power Change in the anime. 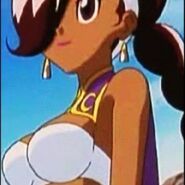 in the anime series 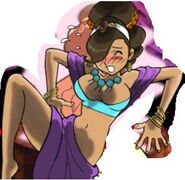