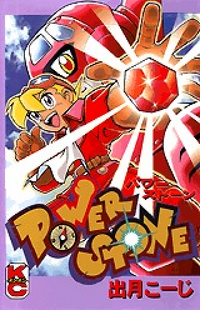 Power Stone (パワーストーン) is a manga by Kōji Izuki based on the Power Stone game. It was serialized in Kodansha's Comic Bom Bom from April to September 1999 and published in a 214 pages tankōbon on September 3, 1999.

Published in April 1999. Wanting to be like the top-notch fighter Valgas, Falcon participates daily in battles with prize money to improve his body and skills. One day, a mysterious stone named Power Stone was delivered to him by his father, an archaeologist. At first Falcon thinks it is junk, but when the evil octopus team Octo and Pus attempt to steal the stone, he notices the severity of what his father entrusted him.

At that time, the Power Stone suddenly began to light and Falcon floats in the air, and feels his body getting hot. He screams Power Change and, for his surprise, transforms and gains great power, being able to easily defeat Octo and Pus.

In the shadows, another person observes the events.

Published in May 1999. A person named Ryoma comes out from the shadows and tells Falcon that he saw what happened and is traveling the world looking for someone with a Power Stone. Also, a girl named Ayame is trying to find a Power Stone for unknown reasons.