Kraken (クラーケン, Kurāken) is a boss and playable character from the Power Stone series.

Kraken is the penultimate opponent in Power Stone, being fought in his ship, Skullhaven. He is the brutal and cunning captain of the pirate group known as King Octopus and has a large artificial right hand that has a variety of attachments. Even after all his men died, he is feared around the world as the "one-armed man" (片腕の男).

Kraken can be unlocked in the Dreamcast and PSP versions of the game after completing the game with all eight standard characters. In his ending, "Revival!" (リヴァイヴ！), Kraken uses the Power Stone to revive his pirate mates, and they obtain control over the seas, being feared by all sailors.

Kraken doesn't appear in the original Power Stone 2, but he can be unlocked in Power Stone Collection by completing the 1-on-3 mode.

Despite his age, Kraken has high offensive and defensive power, but his movements are somewhat slow. He mainly relies on brutally attacking his opponents or acting slyly. His gun and giant claw give him more range and power, and the claw is big enough to hold a person. His claw can also be replaced by other devices, transforming into a drill when jumping from a pole. In the anime, he has a buccaneer fighting style able to defeat his opponents with one knock out blow.

When transformed, Kraken has a ghost-like appearance. His head becomes a skull, his claw is sharp, and his gun turns into a small cannon. In the anime, he is able to summon wild sea animals from the ocean and waters using the Aqua Stone to attack Falcon and his group.

Kraken is the ruler of Aqua Land. He has the aqua Power Stone and wants to obtains the other stones to conquer the world. In the anime, Kraken's crew consists of Octo, Pus, and several fishermen that he convinced to join him. He is the mastermind behind the evil plans that were foiled by Edward Falcon and his friends in Fire Land, Gold Land and Moon Land. After finding about his plans, Falcon and some of his friends travel to Aqua Land to stop Kraken. Except for Octo and Pus, and his men abandoned him, and he lost his ship and the Power Stone.

Kraken appears near the end and overwhelms Edward and Wang-Tang, but is beaten by Valgas. 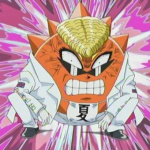