Jack (ジャック, Jakku) is a playable character from the Power Stone series. In the anime, his full name is Jack Winslow and is a recurring enemy until Episode 25.

Jack makes no distinction between right and wrong. He only cares about pretty, shiny things, and cutting with his knife. In Manches, his hometown, Jack the Slayer used to stop women and steal their shiny jewelry. But then one day he overheard a tale about the Power Stones, the most dazzling jewels in all the world, and he immediately set off to claim them for his own.

In his ending, "Who is This Guy?" (フー？ Fū?, "Huh?"), Jack finds the Power Stone in Avalon Is. and makes his wish. A doppelganger appears to have been caught in his place, claiming the population and making it easier for him to obtain more shiny objects.

In Power Stone 2, Jack's wishes were increasing after he obtained the Power Stone. "I want more shiny things... I want to slice more...!", he says. As if in response to his desire, he hears a mysterious voice echoing in his ears: "A mysterious castle will emerge in the night sky at the next full moon. There, a lot of shiny treasures are waiting..." Without noticing that it's an invitation from the darkness, Jack is happily absorbed into the floating castle during the full moon.

When transformed, Jack becomes a large segmented machine with one robotic red eye and giant blades for hands and feet. The segmented parts of his arms have smaller blades on them. In both games and in promo art, his Power Change form is either blue or green. In the anime, it is a purple-like shade of blue.

Jack's moves are surprisingly agile, mysterious and unpredictable, due to him being able to contort his body. However, he is not as powerful as his appearance suggests. He is better at rapid attacks, disturbing the opponent's rhythm and wearing the enemy down over time.

Jack is the last surviving member of the Winslow family, the former royal family of Sun Land. His ultimate goal is to find the Power Stone like the one in his mother's portrait. Unlike the first game, his voice is unfiltered and he fights with smaller knives and needles along with his dual knives. 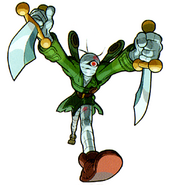