Gunrock is a miner from Dawnvolta with nerves of solid steel and never gets upset. This kind-hearted father willing works in mines. One day, he heard about the legendary Power Stones from a fellow miner and departs in a journey to obtain them. In fighting, he relies on his unrivaled brute strength.

In his ending, "The Great Power Stone!" (グレイト！, "Great!"), Gunrock finds the Power Stone in Avalon Is.. Back in his hometown, he was seen playing cards at a bar. With the help of the Power Stone, he gains a royal flush and wins the game. He buys a round of drinks for everyone in the bar and is happy that he will never need to worry about paying for drinks again.

In Power Stone 2, Gunrock was having fun drinking with his friends, but he was starting to get bored with his everyday life. Wanting to go out in a treasure hunt again, he obtained information about a flying castle said to contain an ultimate treasure that no one has ever seen. He decides to search for it, and a few days later, the floating castle appeared on the top of the Chomoran Mountain as the rumors foretold. Using an oversized cannon that he bought, he points it toward the castle, gets inside and fires himself to get inside.

Gunrock wears a blue bandanna on his head, a pair of golden yellow thick scarf with yellow diamond designs and yellow designs at the edge of his scarf, green pants, blue gloves and brown boots.

His anime appearance remains largely the same as in the games but minor changes; his bandanna and gloves are light yellow, his golden yellow thick scarf no longer have diamond designs and the yellow designs changed to brown with two white stripes at the edge of his scarf and his pants is changed to olive green and have a blue heart-shaped sewn at the back of his pants.

Gunrock is a powerful fighter with a huge built, and his immense strength and defense makes up for his low mobility. Thanks to his magnificent strength, he can throw objects better than any other fighter. In the anime, he demonstrates his brute strength when he wrecks some things in the gambling hall.

In his Power Change form, Gunrock resembles a stone golem able to throw large rocks and shake the ground with his weight.

Gunrock is a man from Gold Land that dreams of becoming rich quickly, continuously attempting to obtain fortunes like the Power Stones. He is a splendid father with a generous heart, takes everything easy and never fazes. He is skilled at paying out and has great physical strength. He loves gambling (especially playing cards) and drinking. He works in a mine. He also is a father to five obese sons who all have the same appearance. Additionally, he is later married to Cassie (Falcon's former love interest) and has three children making his children into 8. 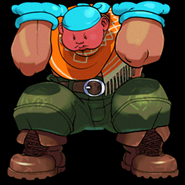 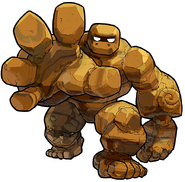 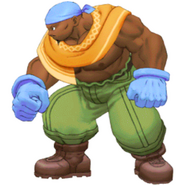 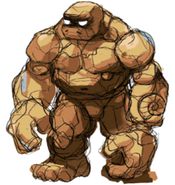