Gourmand (グルマン Guruman) is a playable character from Power Stone 2.

Gourmand is the head chef on the luxurious airship Royal Heaven, which sails aroud the world. Secretly, he is a ravenous chef who will do anything to get his hands on rare delicacies. One day, he learns about the existance of a mysterious flying castle. "Does it have new ingredients no one has seen before?" Conveniently, a huge shadow falls across the path of the Royal Heaven, making his ship tremble. Gourmand jumps ship with his kitchen knife and frying pan in hopes of finding new food to tickle his fancy.

In Power Stone Collection, Gourmand can be unlocked in the first Power Stone.

Gourmand has decent power despite his paunchy look. Thanks to his knife and frying pan, he has the longest reach of all the figthers. 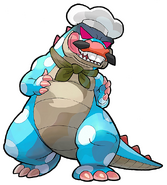