Hailing from the town of Londo, Edward Falcon is the scion of the prestigious Falcon family and an adventurer that circles the world in his beloved "Hockenheim" airplane, searching for the Power Stones revealed in an ancient family legend. With a strong sense of justice, he specializes in boxing and vanquishes evil with sharp moves and explosive punches.

In his ending, "Endless Adventure", Falcon finally finds the Power Stone in Avalon Is., but the place begins to collapse. His father Pride rescues him with his plane, but Falcon accidentally drops the stone and blames his father's "lousy piloting" for it. Falcon swears that one day he will return and obtain the Power Stone again.

In Power Stone 2, Falcon was in a transatlantic journey to Londo with the Hockenheim when a sudden thunderstorm makes him lose control and a flying castle appears. Falcon is certain that this is the ancient mysterious castle said by his father to appear once in a while, and can't wait to see it as he was starting to get bored.

Falcon has short blonde hair and blue eyes, sporting a pair of dark brown pilot goggles on his head. He wears a classic red pilot uniform with a loose white cravat and wears brown gloves and boots. His jacket shows a United Kingdom flag logo on both of shoulders and a Michelle Heart logo on the back.

In the anime, Falcon's design remains the same like in the games, with the exception of the blue and white cross designs on both of his shoulders replacing the flags and the lack of design on the back of his jacket. Falcon also has a white short sleeved shirt or a tank top beneath his outfit. During his boxing matches, he is seen in shirtless and without his pilot goggles.

As a child, he wears a dark red formal suit jacket with a white turtleneck shirt, orange checkered pants, and brown shoes.

When he visits the opera with Ayame, Falcon wears a white formal suit with a pink long sleeved button shirt and a green bow tie.

While in his Power Change mode, Falcon wears a red jet-like metallic suit with a gray rocket on his back. During the anime finale, Falcon's second Power Change form changes to a white suit with a red cross design across the front. This form has his mouth covered, black and yellow eyes, and two white horns on the front and back of his head. The pauldrons on his metal suit are much larger and can sprout white angelic wings.

Falcon is a balanced fighter with no outstanding strengths or weaknesses. He is able to double jump. Despite his boxing skills, he can kick his opponents at the same time by using somersault. When he pulls off his combo such as beating them with his punches and knocks them with a somersault. This also happens in the anime when he uses both punches and kicks on his opponents.

Falcon's Power Change is a red android-like form able to launch many missiles. He is also able to fly with the rocket on his back, but in the games, he only does so when using Power Rocket. In the anime finale, Falcon's second Power Change form, using the Light Stone, is a white jet-like android with angelic wings.

Falcon is a boxer and a big fan of the world champion Valgas, dreaming to one day face him. He receives an old stone from his father in his birthday, but he has no interest in it and asks Apollus to take it back for him. However, when two pirates attempt to steal the stone, Falcon stops them. Apollus wonders if it is a Power Stone and reminds Falcon of the legend, which his father left to search for years ago.

The two pirates call reinforcements and start pursuing Falcon to steal the stone. During the pursuit he is challenged by Ryoma, who also has a Power Stone. When surrounded, Falcon decides to stop running and face them all. The rock shatters, revealing the red Power Stone that makes him transform. With his new powers, Falcon easily defeats the pirates. He is surprised by the events and wonders what his father has gotten him into.

Apollus convinces Falcon to search for his father and learn more about the Power Stones, starting his adventures. While in Wood Land, he meets Wang-Tang and the second Power Stone he received from his father makes him transform. Falcon than starts training with Wang-Tang and Ryoma. 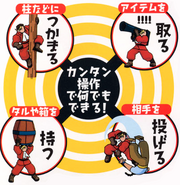 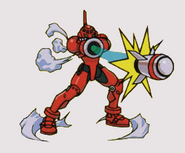 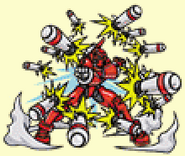 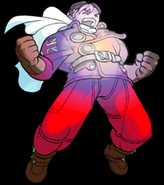 Power Change in the anime. 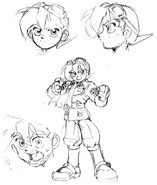 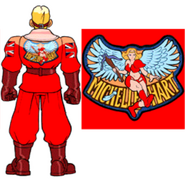 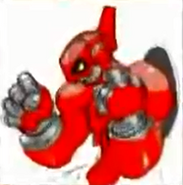