Little is known about Dr. Erode except that he has a large Power Stone that gives him power and is the ruler of a giant flying castle. He apparently to have gathered the playable characters to his castle so he could use their lives as a way to increase the power of his Power Stone. However, things don't go as he planned and he is defeated by them in the Chaos Area. Afterwards, his body starts collapsing, and the seven standard Power Stones appear and seemingly absorb Erode's Power Stone, flying away and making him lose his power. Appearing to be unable to survive without it, Dr. Erode dies and his castle is destroyed.

Dr. Erode is a monstrous giant that sits in the corner of his lair. The food in his plate, the giant shaker, and the teapot can be throw at him for some damage, and the area has two item chests. His weak point is his head, and he will faint when he receives heavy damage, temporarily exposing his even more vulnerable heart before he regains consciousness.

Dr. Erode attacks by releasing beams from his hands (either with only one of both hands), stabbing with a giant fork, lunging his arm to take an opponent to his mouth and chew the prey, releasing giant fly-like creatures from his mouth, and by drinking from his cup and hurling it out in the center of the area, the liquid leaving targets dizzy. If he is not defeated before time runs out, Erode will use both hands to kill his opponents with a powerful blast. 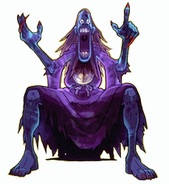 Releasing energy beams from the hands

Attacking with a fork