Ayame (あやめ) is a playable character from the Power Stone series.

Officially, Ayame is a cheerful, perky tomboy star artiste and poster girl in a traveling troupe. Secretly, she is descended from a ninja family and is herself a master ninja who can toy with her foes with daring feats of acrobatic grace. Obeying her lord's order, she and her family are sent on a quest to acquire a legendary stone, and she pursues the Power Stones.

In her ending, "An Amazing Story?", Ayame and her family find the Power Stone in Avalon Is., but they decide that it is too good for their master and keep it, giving a fake stone to their master instead.

In Power Stone 2, Ayame receives a letter from her master telling her to come back while traveling with her troupe. Believing that her master discovered that the stone she gave was a fake, she decides to find a real Power Stone and turn it over to him as forgiveness for her crime. Hearing rumors of a treasure in a flying castle, Ayame takes off alone in hopes of finding a Power Stone.

Ayame is a slender, petite teenage girl with brown eyes, pink blush to her cheeks, and dark blue hair tied in a Japanese-style bun with a shiny gold hairband and tama hair sticks. Her standard attire consists of a long-sleeved green Japanese yukata with white lining and golden cloud patterns, a large blue obi ribbon, a red-and-white rope wrapped around her rolled up sleeves, and a red undershirt. She also wears blue-colored wraps on her wrists and ankles, and brown zōri sandals with red hanao straps on her feet.

In her anime appearance, Ayame remains largely the same as in the games and with a minor color change; her yukata dress is yellow-green and the sleeves are not tied into short sleeves (she tied her sleeves with a pink rope during her performance), her blue large obi ribbon is lighter, her wraps on her ankles are pink, her wristbands are white and the hanao straps from her brown zōri sandals is light green. Her hair is black instead of dark blue.

During ninja missions as well as attempting to steal Edward Falcon's stone and during her failed attempt on infiltrating Kraken and his crew at Moon Land, Ayame wears an indigo blue ninja uniform with a matching mesh shirt, arm-guards, a half-mask, and a hood. She also wears a long pink scarf on her neck.

When she goes with Falcon at the opera, Ayame wears a lime green traditional kimono dress as the long sleeves had yellow designs in each side and are tied in a white obi with red trim. Her gold colored headband has a flowery design with a red gem on her head.

In her Power Change form, she wears a pink ninja garb under a mesh long shirt with a cyan obi, matching pink tights, gloves with white and yellow flower-shaped gauntlets over her hands, and a pair of bunny-tailed boots. She also wears a pink bunny-shaped mask with a flower in the center and long ear-like tassels that come off the back of her head, along with a giant shuriken throwing star which she wears on her back- giving her a similar appearance to both a rabbit and a butterfly.

Ayame lack strength, her normal attacks being weak, and she has some trouble lifting and throwing heavy objects. But she excels in speed and agility, which she uses in her favor. She is better moving in zig-zag and avoiding opponents while making a run for the Power Stones.

Ayame's Power Change is a pink rabbit-like ninja with devastating attacks by the use of her giant shuriken. In the anime, she is able to call some thunder clouds by spinning with her giant shuriken to make rain on her hometown. 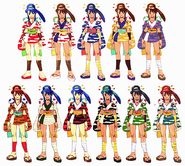 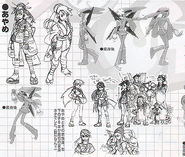